The Yankees made some big moves in the trade deadline for second year in a row. This year they were buyers instead of sellers. The Yankees acquired a little bit of everything and improved at all their weak spots. The Yankees acquired Todd Frazier, Tommy Kahnle and David Robertson from the White Sox. They also got Jamie Garcia from the Twins. Finally today they capped it off with the Sonny Gray blockbuster. The Yankees did all this and only traded one top 5 rated prospect. They dealt some notable prospects in Jorge Mateo, James Kaprilean, Dustin Fowler, and Blake Rutherford however with so many prospects and only so many roster spots the moves were smart. The Yankees moves set them up as legitimate World Series contenders.
Posted by Bronx Bombers Beat at 6:24 PM No comments:

Support the Baby Bombers with tees from BreakingT

The upstart Yankees and their young core have only just begun to excite the faithful in the Bronx. The creative minds at BreakingT have you covered with your Baby Bomber gear needs. Whether it be "All Rise" shirts or "Downtown Goes Frazier" shirts, you can pick up the next hot Yankee item. Be the talk of the town at the office, school, or the Stadium with shirts from BreakingT. Don't worry about waiting for your shirt because USPS Priority mail will get you your new threads in 2 days. 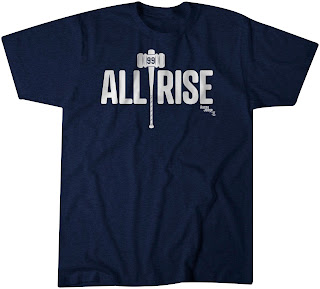 Ever since we started Bronx Bombers Beat we have been searching for the best t-shirt company to help us get great merchandise to our fans and BreakingT is that company. They have great customer service and have a fresh t-shirt design very often. So the question is what are you waiting for? Go to BreakingT.com and order your shirts!
Posted by Warren Tobin at 7:19 PM No comments: