Michael Kay said it best when he said 18,000 men have played MLB baseball and just 29 have 3,000 hits. Alex Rodriguez is one of those men. We all know Rodriguez and his PED history. Rodriguez was suspended for all of 2014 for his involvement in the Biogenesis scandal. For many people it downgrades the accomplishments however you still have to realize that he is a great player. He is one of 29 men to reach the plateau. Rodriguez has messed up many times in his career however always seems to make it back. Even in his age 39 season Rodriguez , while not the same still looks like a force at the plate. Rodriguez has been embraced like his teammates like never before.

Rodriguez will always have the cloud over his head. It's a shame Rodriguez didn't believe in his abilities the way every one else did. Rodriguez was the number 1 draft pick in 1993. Every one thought he would be an all time great and he is their. Rodriguez' stats matchup with anyone in history. Rodriguez has 668 home runs. He has over 3,000 hits and 2,000 RBI'S. His numbers are on the same scale as guys like Babe Ruth , Hank Aaron , Willie Mays and Barry Bonds.

Alex Rodriguez had one of the best careers in baseball history. Some feel he cheated some feel that the numbers are the numbers and some feel he is great regardless. All three are fair points. However
the people who pretend it didn't happen are foolish. It happened , you witnessed it , the whole world did. The people who are trying to protect baseball are not protecting baseball. I grew up watching Rodriguez and appreciate his accomplishments no matter what.  Rodriguez had natural ability. If a young baseball fan asks me what I think of A-Rod I have no problem telling them he was the best I ever saw. I also have no problem telling them he used PED's. I will tell them the whole story not just the story a baseball writer from 40 years ago wants to hear. When you think about all the players who used PED's it's probably a huge number but when you think of those guys who reached 3,000 hits it's just one.

By Peter Vitella
@realpete13
Posted by Bronx Bombers Beat at 8:17 AM No comments:

The Resurgence of the "Old Guys"

If I were to tell you in Spring Training that Alex Rodriguez would be one of the team's best hitters or that Mark Teixeira would 15 home runs you would call me crazy. The fact is that these two have found the fountain of youth and look very similar to the 2009 versions of each other. These two former all stars are currently making their cases for spots in Cincinnati. This has truly been amazing and just what the doctor, Brain Cashman, ordered. 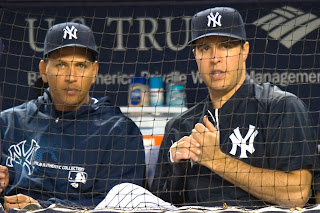 The new age of statistics in baseball has helped fans and organizations view the game in a different scope. The stats in the preseason projected dismal seasons from both sluggers as there were more questions asked about them than the combined home run total of the two. Alex Rodriguez was coming off a PED suspension and multiple hip surgeries. He was also entering his age 40 season which caused the team much concern. Teixeira had not had a quality season since 2010 and his average was dropping significantly throughout the last 3 seasons. Teixeira also battled wrist and leg injuries that led him to missing significant time. These two used the doubt as a way to motivate them into potential All Star candidates. Teixeira may have also used his now famous gluten-free diet to hit a couple of more home runs. 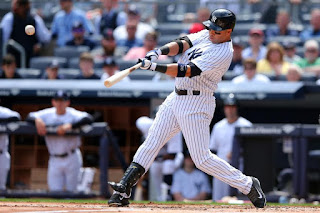 These two along with the recent upswing of Carlos Beltran has showed that these former stars still have some game left in them. Now it might not continue but this has been impressive as they have carried this team. The Yankees will rely on these three and the rest of their lineup to battle for the AL East title as it looks like the race will be a dog fight for the ages.

Posted by Warren Tobin at 11:50 AM No comments: