A-Rod Turns 40 and there's Much to Talk About

Alex Rodriguez was born on July 27th , 40 years ago. Rodriguez was drafted first overall in the 1993. Rodriguez is regarded as one of baseballs most polarizing , controversial , and statistically one of the best. Rodriguez has won three MVP awards , a World Series title , and has 3,000 hits. Rodriguez has over 600 homers. Rodriguez of course has been involved in PED scandals. Rodriguez has a career like no other and it's hard to sum it up with just your basic numbers.

Rodriguez started his career in Seattle as a dominating shortstop. Rodriguez debuted with the team when he was just 18 years old. He won the batting title in his first full season in 1996. Rodriguez played seven years for the Mariners before leaving for his mega deal in Seattle. It's in Seattle where Rodriguez began to get his fame and star power. He had a 40-40 season in Seattle.

Alex Rodriguez was traded to the Yankees after his 2003 MVP season. Rodriguez agreed to move to third base and become a Yankee. Rodriguez would go on to win 2 MVP Awards in his Yankee career. Rodriguez has had his ups and downs with the club personally but was always a top performer for the team.

Alex Rodriguez of course missed the 2014 season due to a PED suspension. Rodriguez was involved in the Biogenesis PED scandal. Rodriguez lost a whole year of his career and many people doubted if he would ever put a uniform on let alone a Yankee uniform. Despite making some huge mistakes Rodriguez was determined to get back.

Today A-Rod turns 40 and is having a remarkable season. On Saturday Night Rodriguez blasted three home runs in one game to put away the Twins. Rodriguez has accomplished many milestones this season as he passed Willie Mays on the all time home run list , reached the 2,000 RBI club and hit a home run for his 3,000th career hit. Rodriguez also has been a main factor for the Yankees who are in first place. Rodriguez is a favorite to win MLB comeback of the year. Rodriguez no longer plays the field as the Yankees DH.


Posted by Bronx Bombers Beat at 10:58 AM No comments:

How History Plays Into The Demotion Of Rob Refsnyder

Throughout the 112 year history of the New York Yankees the team has had great players play second base. The names of Billy Martin, Jerry Coleman, Bobby Richardson, Willie Randolph, Tony Lazzeri, and Joe Gordon, are just to name a few of the greatest second basemen to play for the Yankees, all had great careers in pinstripes. More recently the names of Chuck Knoblauch, Alfonso Soriano, and Robinson Cano have played second base but in 2015 the names have been Stephen Drew, Jose Pirela, Gregorio Petit, and Brendan Ryan for most of the season. None of these players have been close to being as good as the names mentioned before them. But there is one name that makes fans eyes light up and that is Rob Refsnyder. 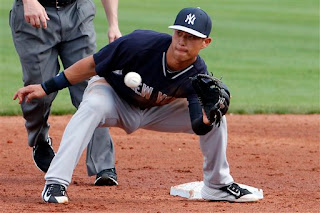 Rob Refsnyder is a top prospect who converted from a right fielder to become a second baseman. Refsnyder was called up on July 10th and played a very good second base. He played better than the 2015 names combined in a short period. Refsnyder was then optioned to Triple A on the 19th of July. Why are Yankees fan livid about this? Its because we want to see another name on that legends list. Ever since Robinson Cano left for Seattle the Yankees have been struggling to find an adequate replacement for him. Brian Roberts, Stephen Drew, Gregorio Petit are just three names that tried and failed miserably. The Yankees fan heard about Refsnyder in Spring Training and in the minors and believed that he could be the answer at second base. Refsnyder is the future but I pose one question to the front office why not have Refsnyder and Didi Gregorious grow together and play in the playoffs together? It could be the start to the next dynasty.
Posted by Warren Tobin at 1:58 PM No comments:

The Yankees First Half Review

Believe it or not we are at the All Star Break. The Yankees sit in first place , 3.5 games up on the second place Rays. The division is tightly packed but the Yankees are leading as of now. The Yankees have been streaky but they continue to play good. The bullpen has been a strength. The rotation has been streaky but good enough. The lineup has knocked the ball over the fence. Carlos Beltran and Stephen Drew have struggled but have contributed at times this season. The Yankees ended the first half taking 2 of 3 from the Red Sox. They finally called up highly touted second basemen Rob Refsnyder. The Yankees news additions had their ups and downs but contributed. Andrew Miller has been a dominant relief pitcher and teamed up with Dellin Bettances as baseballs best relief pair. The re emergence of Mark Teixeira and Alex Rodriguez is why the Yankees are second overall in the MLB in runs scored. Brett Gardner had a great second half as well. Michael Pineda and Masahiro Tanaka have pitched well and Ivan Nova and Nathan Eovaldi continue to improve.

MVP - Mark Teixeira may not have the batting average any more but his average has been respectable. He has 22 home runs. He also leads the AL in RBI with 62. His greatest strength however is his defense. Teixeira is having a Gold Glove caliber defensive season.

Best Pitcher - I will go out on a limb here. I'm not going to pick a starter or one pitcher in particular. I'm going with the Miller -Bettances combo. No one has been more dominant at the back end of a bullpen. When they come into games the game is over.

Best Moment - Alex Rodriguez belted a 1st inning home run off of Justin Verlander into the right field seats it was Rodriguez' 3,000th hit. Last year at this time many people suspected Rodriguez would never play baseball again. Rodriguez  hit the home run at Yankee Stadium and the fans celebrated. Again last year at the time no one , not even Rodriguez could expect it.

Best Story Line - The reemergence of Alex Rodriguez and Mark Teixeira has turned the Yankee lineup into a force to be recon with. Of course guys like Brian McCann ,  Garnder and Jacoby Ellsbury have done a great job also. Rodriguez was written off after sitting out a year as being done. He couldn't hit a fastball and wouldn't make the team. Rodriguez finished the half with a 278 average , 18 homers and 51 RBI. Teixeira sits at 240 with 22 home runs and 62 RBI. Rodriguez and Tex have turned back the clock and if thy can keep it up the Yankees will keep it up. Rodriguez has supplied the magic tying and passing Willie Mays on the home run list and getting his 2,000 RBI.

What to Look Forward To - Rob Refsnyder is finally up and he looks like a promising player for the Yankees in the future. He belted his first home run way out of Fenway Park in the Yankees final game of the first half. He should be the Yankees second basemen of the second half and of the future.

By Peter Vitella
@realpete13
Posted by Bronx Bombers Beat at 9:12 AM No comments: