Review: Out of the Park Baseball 19

Our friends at Out of the Park Baseball return in 2018 with their 18th edition of the game. Out of the Park Baseball is a computer game that gives the user the ability to manage their favorite baseball team however they would like. This is the 18th incarnation of the game and each year, just when you think the game cannot get better the people at OTTP find a way to make it better. 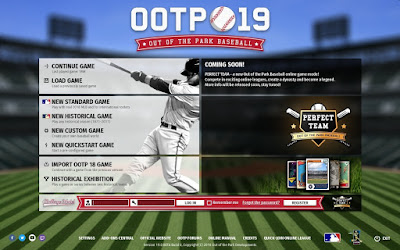 This year's incarnation of the game includes fully licensed Major League Baseball players and teams as well as fully licensed Minor League players and teams. There are also MLB and Negro League legends in the game that you can add to your roster and bolster your team. If you ever wondered how Babe Ruth would perform surrounded by Giancarlo Stanton, Aaron Judge, Didi Gregorius, and Gary Sanchez you can now plug him into the lineup and see how well they all perform. You can also develop your own custom teams and leagues for online or offline gameplay. The game had added new 3D graphics to make your gameplay even more enjoyable.

Personally, I simulated the 2018 Yankees season and had a great time doing it. The Judge, Stanton, Gregorius, and Sanchez lineup absolutely destroyed Major League Baseball en route to another World Series Championship. It was a lot of fun managing the roster just like Brian Cashman and Aaron Boone do. If you want to become a manager or general manager for a day give this game a try and you will see just how hard of a job baseball management is.

This game was excellent and a ton of fun to play. I give it an 8.8/10 for the immense amount of baseball information and challenge that it provides. I cannot wait until next year's game!

If you want to purchase the game check out OTTPB here: https://www.ootpdevelopments.com/out-of-the-park-baseball-home/
Posted by Warren Tobin at 5:46 AM No comments:

The Yankees will call up Gleyber Torres for tomorrow’s series finale against the Toronto Bluejays. Torres will be able to play second and third. With the way Miguel Andujar has played expect Torres to play second and Andujar to play third for the time being. It is a great day in Yankee land. The future is now with Torres and Andujar. 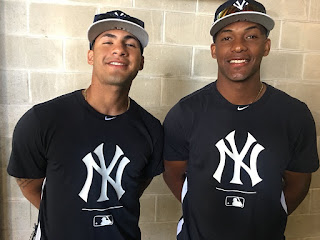 Posted by Bronx Bombers Beat at 4:29 PM No comments:

First Week of the Season : All about Highs and Lows 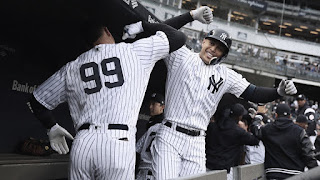 The first week was strange for the Yankees to say the least. They went 5-5 and had some great highs and some severe lows. The first week of Yankee baseball was filled with massive home runs, wasted opportunities, long extra inning games, bullpen collapses and strikeouts.... lots of strikeouts especially from Giancarlo Stanton.

The Yankees went 5-5 as they split a 4 games series with the Blue Jays, swept the two game set with the Rays and lost 3/4 with the Orioles. Today was possibly the worst loss the Yankees had on the season and maybe the worst in years. Giancarlo Stanton struck out 5 times, the Yankees blew a 5 run lead, Aaron Judge hit into a double play in extra inning with the bases loaded and no one out. The Yankees had two collapses against the Blue Jays earlier. They lost a wild game in Friday in extra inning to the Orioles.

It wasn’t all bad for the Yankees though despite massive struggles Giancarlo Stanton had 3 homers including two in his first Yankee game. The Yankees had a game on Wednesday when Stanton, Judge and Gary Sanchez all had homers. In the home opener Didi Gregorius had two homers and 8 rbi. Luis Severino has looked dominant. Dellin Betances has bounced back after a rough outing last week. His fastball command had looked much better. Masahiro Tanaka has looked strong.

The Yankees have lost Brandon Drury, Aaron Hicks and CC Sabathia to the DL. They are already without Greg Bird, Clint Frazier and Jacoby Ellsbury. They had a tough week but still had some nice moments. That will get lost in the shuffle however they went 5-5. It could have been much worse. Giancarlo Stanton won’t bat 185 all season, Gary Sanchez will get going, guys will comeback from injury and the Yankees will be okay.

Posted by Bronx Bombers Beat at 8:05 PM No comments: