What Does the Chase Headley Trade Mean for the Yankees ? 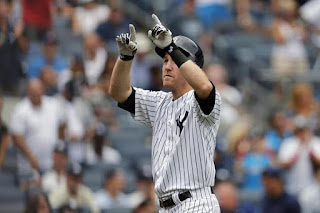 The Yankees traded Chase Headley and Bryan Mitchell to the Padres for Jabari Blash. The Yankees pretty much traded Headley so they didn't have to pay his contract this season. This gives the Yankees even more money to spend and flexibility while staying under the tax threshold.

This deal for the Yankees could mean a few things for third base. The Yankees can explore trading for Manny Machado which is unlikely at this point. They can explore signing another slugger in Mike Moustakas who had his best pro year last year. The Yankees will also explore resigning Todd Frazier. Frazier would be perfect on a 1 year deal. Many sources say he wants a multi year deal which the Yankees should avoid. A one year deal for Frazier would be ideal. Frazier has a very good glove and fit in well in the clubhouse. He also has some power. The trade could also open the door for Miguel Andujar or Tyler Wade. Trading Headley also gives the Yankees some more spending in starting pitching.
Posted by Bronx Bombers Beat at 2:44 PM No comments:

Giancarlo Stanton to the Yankees 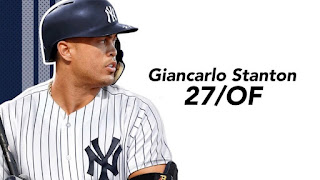 Giancarlo Stanton was traded to the New York Yankees today. Unfortunately Starlin Castro was traded but it was a move the Yankees were smart to make. They trade Castro as their main piece and two prospects who are a long way away. The Yankees just added a man who hit 59 homers to an already dangerous lineup. Aaron Judge , Gary Sanchez , Greg Bird and Didi Gregorious teamed up with Giancarlo Stanton is as dangerous as it gets. We will continue to discuss this throughout the offseason.
Posted by Bronx Bombers Beat at 2:51 PM No comments:

Aaron Boone the New Yankee is Ready for the Challenge 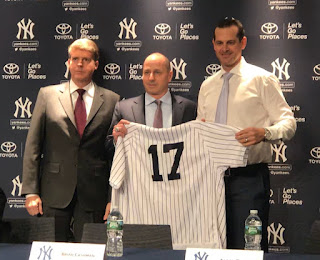 Aaron Boone said his juices were flowing today in his press conference and now so are mine. All Yankee fans should be excited.

Aaron Boone was introduced today as Yankee manager. Boone is most famous for his walk off home run in game 7 of the ALCS in 2003. He leaves the broadcast booth and is now back on the diamond. He showed energy, intelligence and passion in today's interview. He came off as a manager who will focus on having a great relationship with his players. Boone will be able to balance the old eye test and the new analytics way of thinking. He stressed that today and that's very important.

Aaron Boone hasn't coached or managed but he's been around baseball since he's a baby. His family is a baseball family and he's been in dugouts his whole life. Aaron Boone seems like a manager who will be very open with players and the media.

Boone will be expected to bring the Yankees back to a deep playoff run. His learning curve will be in spring training. Boone seems like he will be up for the challenge. He could be the guy to lead the Yankees back to the World Series.
Posted by Bronx Bombers Beat at 12:08 PM No comments:

Aaron Boone is the new manager for the Yankees. It was announced Friday night but made official today. Boone is most famous for hitting the walkoff home run in the 2003 ALCS game 7 against the Red Sox. Boone brings a new look to a young team. Boone will be expected to learn on the job and win right away. The Yankees made it to game 7 of the ALCS last year and some expect them to go to the World Series this season.
Posted by Bronx Bombers Beat at 5:53 PM No comments: