The Yankees aren't rebuilding they're reloading. Some of the big prospects are here and some of them are coming soon. Not to mention the Yankees will have plenty of money to spend in the upcoming years. I see the Yankees as a team that will be very competitive in 2017. I think they can even be a second wild card.

Posted by Bronx Bombers Beat at 9:40 PM No comments: 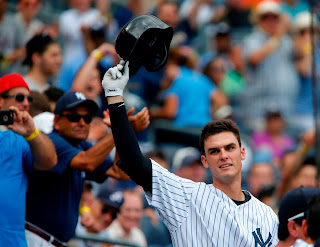 Greg Bird has dominated this Spring and is proving he is back fully healthy with the big club. Bird who missed all of last season is back and has four homers already this spring. The Yankees signed Chris Carter and Matt Holliday two right handed power bats who can play first. The most likely outcome is Holliday is the DH and Carter finds at bats at dh , first and maybe the outfield. Originally everyone believed Carter and Bird would be a platoon but Bird is playing so well he may win the job outright.

Bird is another home grown Yankees deeemed a baby bomber who we are excited to see this season. He showed plenty of power in 2015 and is showing that power is real this year. If Bird has a good year he can establish himself as the Yankee first baseman for years to come. Ultimately I think Bird wins the job and the Yankees deal Carter to a team who needs a right handed bat.

Gleyber Torres is a top 5 prospect in all of baseball and is number one in the Yankees system. The 20 year old dominated the Arizona Fall League and won the Fall League MVP. Torres continues his dominance in Spring Training. Today Torres belted his second home run of the spring. His average for the spring is well over 400. Torres has dazzled at both shortstop and second base.

Torres is likely to spend majority of his time this year in Double A and Triple A. Torres is it 20 and spent most of his time last year in single A. It's possible that he forces the Yankees hand and gets promoted but I think it's likely Torres isn't a MLB player until 2018. It remains to be seen but if you listen to the Yankees they won't rush him. If Torres continues to dominate we might see him in the Bronx.

It's hard to say how many games Clint Frazier will play in the Major Leagues in 2017. Frazier will likely play majority of the season in Triple A. If Frazier is to make it to the Major Leagues this season it would probably be due to the Yankees trading someone or an injury occurred. Frazier has been the talk of town thanks to his hair which he finally cut. Frazier has been streaky this Spring however has has flashes of strong play.

Frazier has speed , power and the star quality. Frazier doe strikeout a lot but not nearly at the amount Judge does. The Yankees will look for more consistency from Frazier before he gets the major league call. I don't think we see Frazier until August unless Brett Gardner or Aaron Hicks gets traded or injured. Frazier needs some more grooming and maybe some more maturity before he makes it to the majors.

Aaron Judge is projected to be the Yankees starting right fielder if he wins the job. So far Judge has cut down on his strikeouts this spring training. Judge has slugged two homer runs thus far. The big man struck out in 50% of his at bats last year. This is an alarming rate for the Yankees. The Yankees can't have Judge striking out at a 50% clip. If he can get this rate down to 35% or better the Yankees will be rewarded.

Judge has 40 home run potential. He has a batting average floor in the low 200s however. If Judge can generate enough hard contact this season he can have a big year. I think Judge will have his ups and downs in 2017 but I think he ultimately sticks around full time. 2017 becomes the year Judge goes from potential star to the Yankees everyday right fielder.