Giancarlo Stanton “Disappointed” to Some but Still was Really Good, How does A-Rod’s history Help Stanton 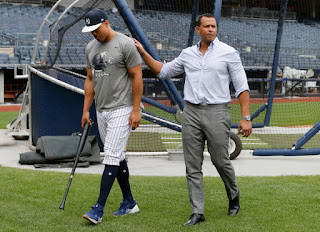 Giancarlo Stanton had a really good first year with the Yankees but not the great season he had in 2017 that won him an MVP Award.

Stanton is constantly comped to former Yankee great Alex Rodriguez. He makes a massive amount of money. He changed positions for Aaron Judge like A-Rod did for Jeter and the Yankees traded for him the year after winning the MVP. He is perceived as not clutch by most just like A-Rod was until 2009 when he put the Yankees on his back in route to a Word Series. Let’s get one thing out of the way A-Rod is a better and a different baseball player than Giancarlo Stanton however Stanton is a great player. They are different players but the comp is fair because of the background. I’d be optimistic for a big Stanton season in 2019.

Stanton and Rodriguez are different players but their stories on how they became Yankees and the expectations they were given are eerily similar. Expect a even better 2019 Stanton season. 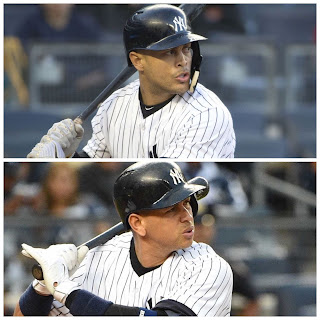 Posted by Bronx Bombers Beat at 3:12 PM No comments:

Yankees miss on Corbin so what’s next ? 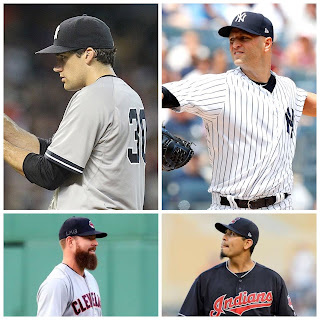 The Yankees were the favorite to land lefty free agent Patrick Corbin but we’re outbid by the Nationals. The 29 year old signed a 6 year $140 million dollar deal declining 5 year offers from the Yankees and the Phillies.

Here’s where the Yankees can turn to acquire another starting pitcher...

The likely options
The most likely options for the Yankees now is turning back to JA Happ who pitched so well for them last year or turning back to former Yankee Nathan Eovaldi. Happ went 7-0 with a 2.68 era in the regular season with the Yankees. Eovaldi had a 3.81 era regular season era after his comeback from another Tommy John Surgery but he really shined in the postseason. Eovaldi pitched to a 1.13 era in the playoffs.


Is it possible the Yankees circle back and look to trade for one of the Indians pitchers? Trevor Bauer, Corey Kluber and Carlos Carrasco have all been talked about in trades. It depends how much the Yankees would have to give up. Personally I don’t see the Yankees giving up Miguel Andujar for either 3 but could they get it done with their top prospects ? If they can then perhaps the Yankees land one of these aces.
Posted by Bronx Bombers Beat at 5:02 PM No comments: 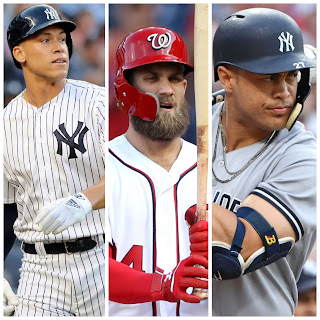 It’s possible the Yankees sign Manny Machado but for the purposes of this article I’ll go with who my gut tells me they sign and that’s Bryce Harper.

The Yankee have an extremely deep lineup already but adding Bryce Harper could take them to historic rates especially if Gary Sanchez rebounds. 2018 was regarded as a down year for Bryce Harper but we are not sure that it will hurt his wallet. Harper is just 26 years old and still shows he is an elite offensive player with even more upside. Harpers counting stats were solid despite his batting average as he hit 249, 34 home runs and had 100 RBI. His OBP was 393 which is solid but not the elite 460 he showed in the past. In 2017 Harper had a 595 slugging, 413 OBP and a 1,008 OPS. He was on his way to potentially his second MVP season before the injury. Despite playing just 111 games he still crushed 29 homers for 89 RBI.

If the Yankees could add Harper they would be adding a premier slugger who has shown he is getting even more patient at the plate as he ages. He is a big lefty the Yankees need. History shows the Yankees win championships with big lefty pitchers and big lefty sluggers. Last year he had some trouble because of how frequently teams shifted on him which is something he can work on or forget about as he peppers the short porch in Yankee stadium. Harper also wouldn’t have to worry about constantly being pitched around in the Yankee lineup because he’d be sandwiched in between two of baseball’s best in Aaron Judge and 2017 MVP Giancarlo Stanton. As far as how would it all work, Judge would have right field and Hicks center. Harper and Stanton could both spend time at left field and DH. On days Judge needs to DH one of them can shift to right. As he ages it’s possible Harper can move over to first base. It’s a move the Yankees should make.
Posted by Bronx Bombers Beat at 2:00 PM No comments: