Aaron Judge Is off to a Great Start

Judge is also hitting the ball harder than every Yankee. Of the five hardest hits based on exit velocity over the past three years he has four of them , Alex Rodriguez has the other in 2015. Judge will have some tough stretches but he can possibly also have some stretches were he does more damage than most. We still need to see more of him before we set large home run goals however the start is promising.

Aaron Judge so far has proved the Yankees right in giving him the starting right field job. He is proving his critics wrong who said he couldn't adjust. He is also playing good in right field. It's early but Judge's early success is a great sign for The Yankees. If he keeps it up he could be the first Yankee since Alex Rodriguez too have a 40+ home run season. Aaron Judge is also giving the Yankees needed power. Greg Bird has been sick , injured and flat out bad. Gary Sanchez is injured for the next four weeks. Right now Judge is the youngster carrying the load and the guy everyone wants to see at the ballpark. If Judge goes into a slump don't think this stretch is a fluke. His adjustments look very real and so does his potential. 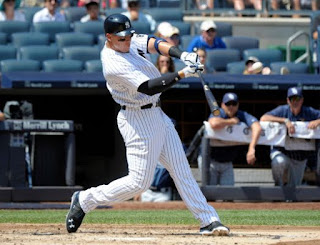