Sleeper - Joey Gallo broke out in a big way in 2017 yet he's being forgotten about in early rankings because of a 209 batting average. Gallo walks , strikes out and homers and that's okay. Chris Davis has been very productive doing the same thing throughout his career.

Breakouts - Greg Bird and Josh Bell are different players but both have the ability to get into elite company in 2018. Bird will hit anywhere from 3-6 in a loaded Yankee lineup. The question for him will be can he stay healthy. If he can stay healthy he can profile as a 30-40 homerun hitter. Josh Bell began to breakout in 2017. Bell hit 26 homers and had 90 RBI. As his discipline at the plate gets better he may see an uptick in walks and batting average.

Bargain Bin - Miguel Cabrera is going to be forgotten about by some after an injury plagued 2017 but he will bounce back. Cabrera was a beast in 2016 hitting 316, 38 home runs and 108 RBI. In 2017 Cabrera played 130 games but was constantly hurt and hit just 249. He had just 16 homers and 60 RBI. If healthy Cabrera will be much better in 2018 despite being 34. Getting Miguel Cabrera in rounds 4-6 could be a huge benefit to your squad. 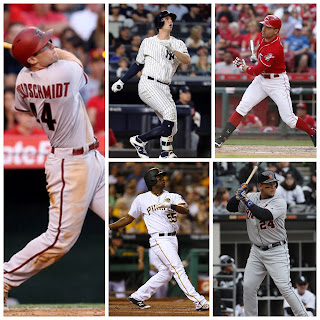 All Rankings to be updated if needed
Posted by Bronx Bombers Beat at 12:29 PM